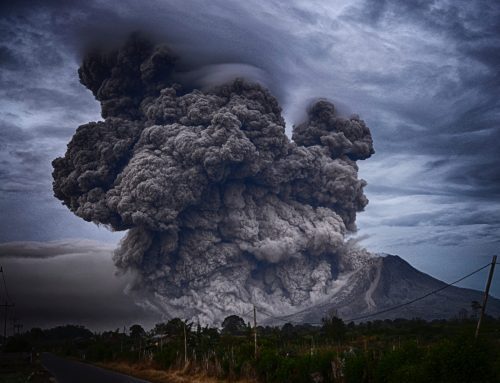 Would you know how to survive if a volcano erupts in your area? Would you be prepared?

Among the most powerful and destructive natural disasters, volcanic eruptions are catastrophic.

The Ring of Fire is a region around the rim of the Pacific Ocean where many volcanic eruptions and earthquakes occur. It includes the Pacific Coasts of South America, North America, and some islands in the western Pacific Ocean. National Geographic states that the majority of Earth’s volcanoes and earthquakes take place along the Ring of Fire. 75% of earth’s volcanoes are located on and 90% of earth’s earthquakes occur along its path.

The largest volcanic eruption ever recorded was Tambora. In 1815, the Tambora eruption sent more than 50 – 150 cubic kilometers of magma and collapsed to form a very large, deep caldera. It produced a giant plinian eruption column that is estimated to have reached 25 – 30 feet into the air, ejecting large amounts of ash and aerosols into the air. Pyroclastic flows reached the sea, causing 30-foot tsunamis. An estimated 60,000 people were killed.

You guessed it, Tambora is located on the Ring of Fire.

Look at that view! It is so beautiful, but sometimes clouds obsure the view. People in the Seattle area will say, “I hope the mountain is out today,” especially if they have guests visiting.

We live in a small town within sight of Mount Rainier. Though spectacular, the mountain is an active volcano. It’s part of the Ring of Fire, and we are all taught how to be prepared in case of a volcanic eruption. Between earthquake preparation and volcano preparation, we in the Pacific Northwest should be able to survive a volcano erupting.

Have you seen the movie Dante’s Peak? The volcanologists around here use this movie as an example of a volcano erupting, and it is required viewing in some college courses on volcanoes!

Scientists, who study volcanoes are called volcanologists, are learning how to predict the likelihood and severity of eruptions. But they’re a long way from being able to tell us when a volcano will blow its top. While there may be some general signs, like tremors or unusual animal behavior, it is important to understand some basics about the event so that you can prepare to respond in an emergency to a volcanic event.

Become familiar with the terms scientists use to describe volcanoes and volcanic eruptions. That way, you can better understand news reports and information.

Volcanic ash is small dust particles and pieces of rock that are erupted into the air with volcanic gases. These ashes are highly acidic and can decompose fabrics, corrode metals, clog machinery, and block water flows. Volcanic ash kills animals and plants. On roofs, it can build up to weights that will cause the building to collapse. Mixed with water, volcanic ask is like cement. It hardens quickly, making breathing deadly.

Pyroclastic flows are streams of molten volcanic rock, called lava. The speed at which they move depends on the terrain and the composition of the lava. Some pyroclastic flows move very quickly, engulfing everything in their path.
Learn the most likely places in your area for pyroclastic flows. Since they are semi-liquid, they’ll probably follow low-lying areas like riverbeds and floodplains.

How to Survive If A Volcano Erupts:

If a nearby volcano shows signs of erupting, stay away from it. The eruption could happen in the blink of an eye. If you’re too close, you won’t be able to escape.

If a volcano erupts in your area, you should do what you can to be prepared to survive!

Any Volcanoes Around Where You Are? Be Prepared If They Erupt!

Volcanoes are one of nature’s most powerful forces, and much of their damage can’t be prevented. Even after the eruption has passed, the event isn’t over. There’ll be massive clean- up, slow reconstruction, and lingering environmental and health problems.

If you are in an area near an active volcano, you owe it to yourself to understand how volcanoes behave and the threats they present. Know what to do to preserve your life and protect your property. And if there are any signs of an impending eruption, listen to the radio for updates and important life-saving information.

Will you know what to do and how to survive if a volcano erupts in your area? The better informed and prepared you are for such a terrible event, the more likely you will be to survive and remain healthy. Here’s a list of 100 ways you can start to get prepared for disaster to get you started.

The Survival Blueprint Course Is Coming!

Are you prepared to survive when natural disasters, pandemics, national disasters, or other emergency situations disrupt your daily life?

Your mission, should you choose to accept it, is to create your personal Survival Blueprint so that in just 4 weeks you will have an action plan that will help you be more self-sufficient when the world is crumbling around you.

If you are interested in learning more about being prepared for the unexpected, I am offering a course to help people create their own survival blueprint. With this blueprint, you will have an action plan that will help you be more self-sufficient just in case the unexpected does happen.

Let me know if you are interested in more information here and we’ll get you on the list!